With endless trails of boutiques for just about anything luxurious and trendy, it is easy to see why Milan is a global fashion capital. Sauntering inside the shiny tiled floors of the high-ceilinged Galleria Vittorio Emanuele II, bumping into a flux of tourists scraping empty their gelato cups while ogling at extravagant displays of known fashion brands, pretty much describes bulk of the Milanese experience. Not to mention, of course, taking advantage of aperitivos and world-renowned Italian cuisine.

Milan, as part of Italy, does have its share of significant historical sites however not as extensive as its contemporaries. There is of course the Duomo, the big cathedral which is what people usually remember when they hear Milan. With its triangular gothic, spiked façade and immense size, it is difficult to miss this edifice at the city square. The rest of its prized landmarks are all walking distance from this pigeon- and tourist-filled square. 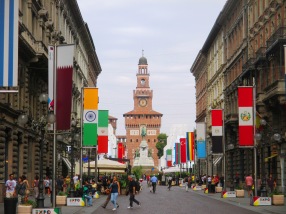 Taking northwest by the charming commercial promenade of via Dante, you will reach the Castello Sforzesco, castle and citadel remains, now transformed into a Museum of artifacts, archeological digs, and Italian art including Michelangelo’s last piece, the Rondanini Pieta. There is also a cozy park behind the castle which ends with a mini arc-de-triomphe and a circular piazza surrounded by modern and hip bars and restaurants. 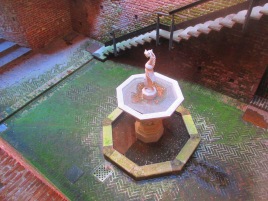 Not far is the home of Da Vinci’s Last Supper, the church of Santa Maria delle Grazie. You need an advanced booking to view the famous painting although you can go inside the Church for free and equally admire what is left of Da Vinci’s already fading murals.

Quaint chapels and remnants of ancient stone gates are scattered around the city in between modern houses and apartment buildings which still kept some of their old-world visage. The city is not the cobblestoned European stereotype since it is already quite modern in most respects but pops of pocket squares, brick chapels, old trams and tracks here and there, offer quite a glimpse of old Milan.

Down south is also the interesting quarter of Navigli with its artificial canals lined with bars and restaurants slightly cheaper than that in the city center. It offers a vibrant atmosphere for a good stroll and people watching. So if you get tired from the glitz and glamour of the more commercial central Milan, this quarter is a good, slightly romantic escape.

Milan is such a bustling city that is less charming than the rest of old world-looking Italy but its appeal lies in its modern take on the contemporary and sartorial Italian lifestyle. Precautions, however, should be taken while channeling through the main thoroughfares, central train stations, and public as well as, of course shady-looking places. The city is quite notorious for theft so the old adage of not trusting random strangers can be a good advice especially if you are travelling alone. But yes, Milan functions more as Italy’s international gateway rather than a destination itself, more apt for business and commerce rather than soul-searching, but because it is a hub, it is the center of a web of connections to Italy’s awesome countryside so better take advantage of this if ever you find yourself traveling near this big city.

3 replies on “The Milanese Pulse”

No problem 🙂
Check out my blog when you get the chance 🙂