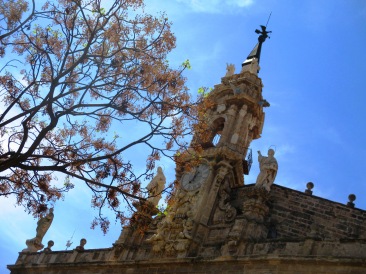 It’s just the advent of spring and it already feels like summer here in Valencia. The thing I love when I visit Spain is that every time, I am always treated to the warmth and hospitality not just of its climate but of its fun-loving, kind-hearted people.  This time was a bit more special because I get to spend it with my best friends who I haven’t seen for a while. We stayed at our friend’s place, an hour from Valencia and so we enjoyed a homey accommodation filled with the love from a super awesome Spanish family. We munched on daily doses of bocadillos stuffed with artisanal ham and cheese, loaded Spanish omelletes, and on Easter, a plateful of homemade paella which totally immobilized us and up to this day, its taste still lingers in my senses. Having a friend who knows the city is always a plus. For one, you get to have a tour guide to show you the nooks and crannies of the architecturally gifted city. It was quite a breeze and with warm company and a generous weather, there was every reason to enjoy our tour of charming Valencia.

First of all, it is an architecture paradise. I don’t know much about architecture but all the famous styles that I am at least familiar with are well-represented in the city’s squares and buildings. Starting from the art nouveau-decked Estacio del Nord down the path to the modernist city hall and further to the Plaza de la Reina where the gothic-baroque Cathedral of Valencia is located, we were treated to a massive succession of building architectures that brought us to the different periods of the history of Spain. 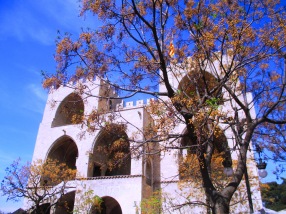 There is also this late Baroque a.k.a Rococo wonder that is the Palacio de Marques de Dos Aguas which went so loco over Rococo it was insanely ornate. It also has a huge statue of what is called the spinning virgin by its façade which can be rotated to face in or out of the palace to the desires of the owner’s religious rituals. The UNESCO heritage site Llotja de la Seda, with its lavish spiral columns characteristic of Valencian Gothic is an ode to the rich commerce the city used to enjoy.

Valencia also has a period of Muslim invasion thereby showing some Moorish influences in some of its architecture. The thing about Valencia is that it loves to keep fragments of its past and so the buildings tend to be humungous mongrels of periodic designs from throughout its history. The trencadis tile shard mosaics, famously associated with the great Antoni Gaudi, are also common ornaments for modernist buildings like the Valencian Central and Columbus markets, consistent with the nearby Catalonia design staple. 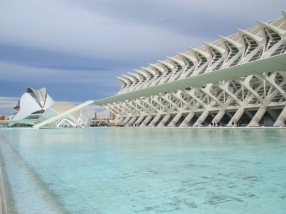 East of the city before the busy port, on the other hand, is the spectacular complex of the City of Arts and Sciences designed by the infamous Santiago Calatrava and is now part of the recent 12 wonders of Spain. The futuristic-looking complex is an assembly of entertainment-based venues (museums, theaters, concert halls), and Europe’s largest oceanographic aquarium. It is aesthetically pleasing and it felt like we were brought somewhere into the future or inside a sci-fi film.

Valencia was quite a treat. I enjoyed the city from the food to the diversity of its architecture and the warmth of its people. It kind of sealed the deal in my quest for favorite country in Europe. Spain really never fails to deliver. I’m sure someday I will find my way back to this awesome region and who knows, I may just settle down in here. It is truly not a terrible idea.

5 replies on “Pleased To Meet You, Valencia!”

That is so beautiful:)

Reblogged this on Change The Code.