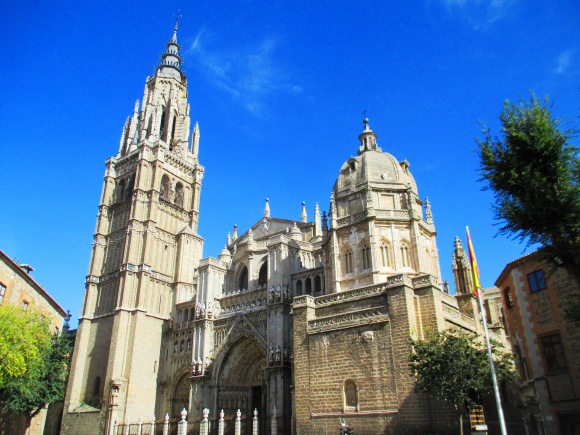 The walled city of Toledo, a short drive from Madrid is one of the most well-preserved historical destinations in the world. Dubbed the city of three cultures, Toledo demonstrated the harmonic coexistence of Christians, Jews, and Muslims. An utter mélange of these three religious cultures brought about an eclectic palette of ancient architecture (gothic churches, synagogues, and mosques) united by similar characteristic tawny hues. The narrow streets are steep and winding but traversing and getting lost around them is the best thing to do in this city because in every corner, you could most likely stumble upon an interesting edifice. 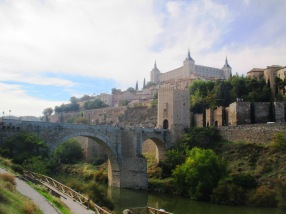 The city rests beside the river Tagus which somehow serves as a moat. The entrance to the city, the great Alcantara Bridge appears as a grandiose welcome to the old city. Sections of the surrounding walls are still intact and are open to the public. They serve as elevated promenades offering magnificent views of the surrounding hills.

The skyline will also make you swoon. The medieval vibe is apparent as you trace through the varying heights of its ancient churches, temples, and public buildings. The view from the San Ildefonso Jesuit church is to die for, boasting picturesque views of the Alcazar and the Cathedral of Toledo. 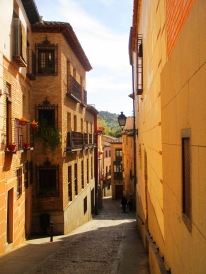 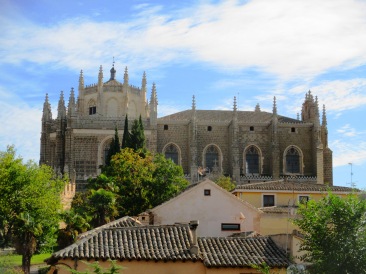 Probably, one of the most fascinating things about the city is the people’s penchant for medieval artillery and all things knight-related. Fake shields, swords, even full body armors are hanging on walls and shops luring tourists in their quest for novelty souvenirs. Well, it’s really a good marketing strategy being in such an ambience as valiant Toledo streets, so who can blame them.

Toledo sure is an open air museum. It is a relaxing escape from the busy streets of Madrid. I have never seen a walled city so well-preserved and still almost intact. As a relatively a small city, it is does not take a lot of time to go around Toledo so it is a recommended day tour option for Madrid. If you have time to kill, hikes on surrounding hills with vistas and panoramic views of the city could be an option. It can be excruciatingly hot though especially in the summer but the usual summer kit would do (e.g. sunblock and a bottle of water).