One of the places you would be happy to get stuck in for a long layover is Taipei. Thanks to its cheap and efficient transportation options that can get you from one end to the other in a breeze, moving around Taipei can never be any easier. The Taoyuan Airport is a busy hub for plenty of airlines, mostly those that traverse the Pacific. It’s a good 55 min by bus to the city’s main train station although that trip includes roughly 20 minutes through the city’s main bus stops and traffic. It could also be an acrophobe’s nightmare as the airport expressways wind through valleys and hills, elevated to a good probably 50 ft above the ground. Well, one can just avoid looking beneath and simply admire the lush forests and the modern city skylines that surround. 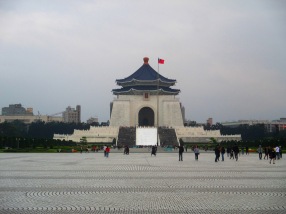 When you don’t have much time, at least, you should visit the Liberty Square which is one of the main emblems of Taipei. This sprawling perfectly landscaped square has a huge white gate as its portal along with three important edifices – the National Concert Hall, the National Theater and the Chang Kai-Shek Memorial. It’s definitely majestic like walking your way through heaven only to find a sitting Chang Kai-Shek giant beaming at you. Taipei 101 is another important landmark which used to be the world’s tallest until Middle East and mainland China caught the supertall skyscraper adrenalin. Still, its soaring height is a sight to behold from below. At night, it has some hourly futuristic lights display.

What makes Taiwan special, however, are its temples and markets. The Longshan metro stop is your way to go with a network of under- and on the ground markets selling anything from tasty treats to charms and even some fortune telling and massage. Exiting from the market tunnel, you will immediately see the Mengjia Longshan’s (Lungshan of Manka) superbly embellished temple tribute to Chinese deities, encumbered with the smell of flowers and incense. I think if you want an immediate taste of Taiwanese culture, this is the best stop to have a super quick dose. 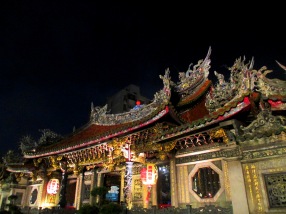 Surely, you would hunger for Taiwanese food and although I would normally scout an authentic corner to grab my street food, I couldn’t squeeze in a trip to the famous Shilin Market (also, I can’t haggle in Chinese) so, while on my way back to the airport I stumbled upon probably one of the craziest pedestrian underground networks in the world which doubles as a market/mall under a train station – the Taipei Main Station underground. It’s a labyrinth of markets, malls, restaurants where I got lost several times. Good thing English is not hard to find. I stopped for a rapid serving of beef noodles after painstakingly gesturing it in the menu in one of the small restos at QSquare and grabbed some pork buns and mochi from some shady stall for my trip back to the airport (which never actually made it to the airport because I finished them while on a long and winding journey to find the damn East Exit that leads to the bus stop). Not bad at all.

But yes, I made it in 6 hours without so much rush. Thanks to the efficient first world metro system but more importantly, the secret is of course to accept that with a limited time, you cannot see everything so you have to pick a few sights and just enjoy. Actually, wherever you go, you can never visit everything the city or place has to offer so it is quite futile to pack your itinerary to stressful levels. But yes, given another opportunity, I would definitely spend much more time in Taiwan, mostly just to eat and then hike out all the gained weight off me. I heard there are plenty of awesome hiking trails in there so I definitely would like to try that in the future.

5 replies on “Taipei in Six Hours”

We’re visiting for a week soon, really looking forward to it!

Oh you will love the city especially the food! Enjoy your trip! Bon voyage!

Have also heard about Taipei’s incredible hikes. Looking forward to tackling them at some point. Love those rooftops you have captured.

Yes too bad I didn’t have the time. But yes, I can’t wait to see your amazing photos. 🙂