Now we go to the south of Europe for one of the most beautiful cities in the world. I’ll be terribly biased by the way, because it is my favorite city (next to Porto that is) so there’s really nothing here but all good things about this city. I’m talking about the capital of Andalusia, the royal city of Seville. I don’t even need to put a lot of effort to persuade you about how beautiful it is. Just one google image search of its name and you’ll be astounded by how such a city can exist and how, after all this time, you haven’t heard a lot about it (well unless the search returns result in football team photos).

We went there one spring during the holy week where religious festivities are still quite a thing. The Giralda, one of the most ornate bell towers in the world, triumphs over the city rich in history where people still hold processions lifting floats of religious figures, chanting prayers and psalms. The area around the Giralda and the humungous Cathedral of Seville was the place to be. We had to squeeze our way through crowds but it was worth it. It was a religious holiday so there was a solemn atmosphere but the explosion of colors in contrast with the city’s sandy hues, palm and orange trees, all gave a rather picturesque moment.

When the crowds became too tight, we simply skirted to the nearby Alcazar palace gardens just beside the cathedral. It was a marvelous assembly of what they call Mudejar architecture, sort of a blend of Muslim and Spanish architectures that is typical of this region which experienced Catholic and Muslim eras throughout its history. Obviously you will see a lot of tile patterns, windows and arches in the palace like how you would imagine Northern African mosques to be but fused with ornate baroque designs. The gardens are also well kempt sauntering there felt like a royal promenade. In fact it was also one of the locations for some Game of Thrones scenes. If you do not have time to visit Granada’s Alhambra, obviously it would be a shame, but these gardens could be an easy substitute if not equally stunning.

The rest of the city is also charming keeping up with this moorish-meets-renaissance vibe with plenty of green spaces to have some siesta. Yes, we see people sleeping in parks at midday and it’s totally fine. You can’t blame them for being in the hottest part of Europe. We tried it as well and now we sort of get why.

Another landmark not to miss (actually it is imperative!) is the Plaza de España. It’s a more recent addition to the archaic bunch (like 1930’s ish) but still blends well with the rest if not actually standing out like the Giralda’s princess. When we went there, we actually entered from the back because we didn’t know where the main entrance was. So at the start we were like, “oh great another church!” because it seems like that from behind but after passing through the dark hallway which opened right into the very center of the sunlit square, we were surprised to see one of the most gorgeous and flamboyant panoramic view of monuments. I’m talking about its long pavilion building embracing a courtyard cut by a small artificial canal under colorful tiled bridges and of course, an elaborate water fountain in the middle because, why not? I never fawned so shamelessly in my life.

There’s really plenty of things to do in the city. There’s the 6-year old Metropol Parasol, a modern addition to the city’s landmarks. It actually emerges and blends quite well with its surroundings despite its architecture. There’s also the bull fighting arena (also a Game of Thrones setting) and a river esplanade by the Guadalquivir River which was witness to the once invincible naval power of Spain that first circumnavigated the globe. 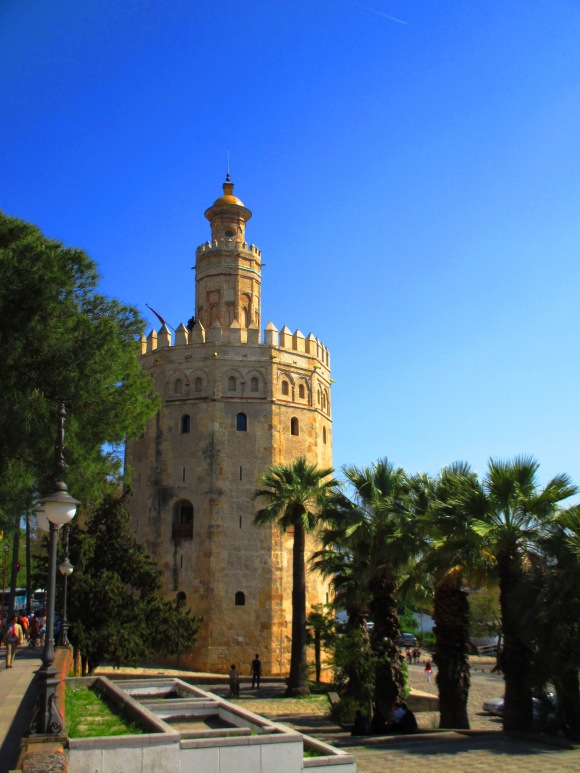 I really love this city. The vibe was just amazing. People looked so happy and charming, there seems to be a lot of correlation with people’s overall disposition and the amount of sunlight they are getting. The small streets where you can dine or drink al fresco affordably and just the dolce far niente (Spanish style) siesta by the riverside or on the park benches just appreciating life as it is. It is definitely a place of dreams.

4 replies on “The Queen of Andalusia”

Your pictures are amazing

Thank you so much! 🙂

Beautiful photos, we were also there during Semana Santa a couple of years ago and enjoyed our visit

Thanks. It’s the place. It’s so beautiful it’s hard to take a bad photo. Haha