Maybe Ben Stiller has to shoot the next museum night in Paris. With the gigantic labyrinth that is the Louvre, he has plenty of space for his epic chases plus a collection of famous artworks to be brought to life.

I have been staying here in the city of love for 2 years now so I have been in the Louvre and Orsay museums in quite an addicting frequency. Well, before I turned 26 that is, the age limit for free museum entrances. So now that I’m a little older, I can only trust winter’s first Sundays and the Museum Night for free museum passes which, of course, the most jam-packed of days. So this year’s Museum Night, 20th of May, I tried catching as many museums as I could, something I don’t really recommend especially if it’s your first time in Paris but still, quite doable. Most of them open the free gates at 6:00 PM and close 30 min before midnight. You roughly have 5 hours and a half but 1 hour you will probably spend queuing and another 1 hour for travel between museums so you barely have an hour or so to tour around each museum which makes it insane!

So the lesson is, pick one and enjoy. Anyway, if you’re not into art, you can’t really tell things apart. You’re just there for that hashtag moment but oh well, we can’t all be artists.

Here are the three museums I was able to squeeze into that tight evening:

I arrived at around 7:30 PM with a good 50 m of queue ahead of me. The line here was quite quick and manageable so it wasn’t so bad.  The small mansion houses a huge collection of Picasso works and sketches, even some sculptures and collages! One floor is homage to his first wife and son and a couple more about his works. The attic is what I like best because all the good stuff are there even including works by Matisse and Cezanne and his Spanish contemporaries like Joan Miro. I left after about an hour and was quite satisfied. Pay attention to the views outside the attic windows for some classic Le Marais chimney-filled skyline. 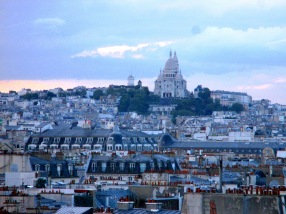 A good 15 min walk from Musee Picasso, the path to Pompidou by rue Rambuteau was actually quite pleasant as you would traverse the famous vibrant Le Marais district. If the cubism from the Picasso Museum is as confusing and mind-effing, Pompidou is a whole new level of eff. Built to resemble an inside-out building, no other edifice is more fitting to house the best contemporary art. It’s a love-it-or-hate-it, know-it-or-you-don’t situation. Some paintings are just canvass painted in blue or white all over and you’ll be like, am I not sophisticated enough to understand it? Anyway, the journey through the halls is definitely introspective. That’s probably the point of it all. But if you leave with your head scratching, at least there’s one thing we can all agree on – the view from the fifth floor is just STUNNING! First of all, it’s the only panorama of Paris that you won’t see the ridiculous building you’re on and if you pan around, you can actually capture a 270 degree which includes the Notre Dame, Eiffel Tower and the Sacre Coeur in Montmartre. How amazing is that?

This deserves a separate post but I’ll try to succinctly capture the essence. It was not a plan actually because it was almost 10PM when I finished at the Pompidou but a friend asked me to go see him there so, having 2 hours to spare, I sprinted to the famous landmark anyway. I have been here many times so I was not a lost lamb; I kind of know the chambers like it’s my own mansion even I don’t have any clue about most of the exhibits there but at least I know the essentials. Of course there’s the Monalisa in the Italian section glaring at the disappointed tourists who will mumble “That’s it?” so many times but still paddle their way through the crowd for a selfie. My favorite sections however are the Mesopotamian exhibits at the Eastern Antiquities featuring the Code of Hammurabi and gigantic Assyrian Lamassus (their version of a bearded sphinx actually), the lavish Apollo Room and the chandelier extravagance that is the Napoleon Apartments. It was my first time to go here at night and sometimes it looks quite different. Also because it is surprisingly not well-lit. Some sections were actually quite creepy but hell, it’s the Louvre.

Visiting three museums in 5 hours was definitely quite a record but I don’t recommend it really. It was not my first time in two of them so I did not bother so much missing out on the important things but I prefer really to concentrate on one and absorb as much as possible what I can. It is not really so much of the quantity of what you see but the quality of the knowledge or impact it has on you that makes the experience. And there goes the preachy part of this post. I try to avoid that always but this time, I can’t think of creative ways to conclude. But anyway, yeah, I will have a more detailed post on them in the future so do watch out and well, visit these museums when you come here in Paris. Museum Night rocks!

4 replies on “Night at the Museum”

Louvre can be quite overwhelming. 😅

It is! Better to just focus on a wing or section on each visit… Or cross the river to Orsay. Haha

I love the Orsay and have visited parts of the Louvre but not the other museums so what a good idea to have a museum Night even if it was very busy. Look forward to reading more later, thank you.

Thanks. Yeah, Paris has so many overlooked smaller museums and next time I want to feature some of them. 😉