Before I became a fan of Game of Thrones, I had wanted already to visit Dubrovnik. Its intact medieval city-fortress hugged by the azure waters of the Adriatic breathes a charm that understandably seduced the myriad of tourists that stomp its stone alleys all year round. It was definitely crowded this year, enough for them to cap the number of tourists inside the walled city. After the rise of GoT, everybody wanted to have that perfect IG post with the backdrop of King’s Landing’s pre-CGI visage. And you can’t blame them… I mean, us. Walking the steps inside Dubrovnik is a magical pilgrimage. It’s finished and manicured for sure and its authenticity is beginning to be concealed by the growing number of tourist-friendly furnishes but it’s still captivating. 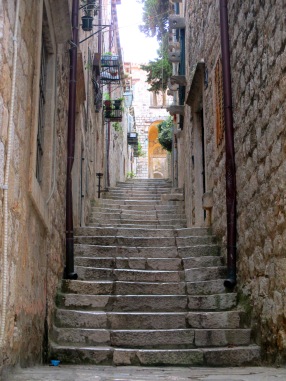 The stairs will be your frenemy in Dubrovnik.

The tiles in the main streets are so polished and reflective it’s like somebody waxes them every day. It’s a unique occurrence given that most cobblestone cities retain the rough patchy ancient stones (There should be a more technical way of describing these types of stones but I ain’t no architect). And the city is surprisingly small and compact so, it wouldn’t take you an entire day to navigate it and appreciate its history and architecture. Just be ready to climb stairs as you have them in every corner. These elevated streets, for me, are actually the ones which give the city its character. While most of the thoroughfares are lost in commerce, the elevated walkways lined by still habitable buildings exude a rustic, threadbare feel.

A pleasant viewpoint is at the Lovrijenac fortress standing atop a mini-peninsula just outside the gates. I didn’t even have to enter the castle as the stairway already offers fantastic views of Dubrovnik especially the western side of the city where the famous Pile Gate is situated. It’s also not crowded as most of the people would opt for the walls instead. 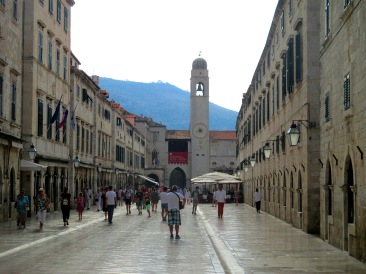 These tiles are somehow self-polishing. I pity the one who has to scrub them.

But the real magic is on the coast, far from the queues and the poking selfie sticks. I am originally from the tropics so I know my beaches and let’s face it, they don’t have the best in the world or even in Europe if you rate it by say, sand quality and available sun-bathing spaces but they definitely offer spectacular views and picturesque rugged shores. My favorite spot is the Sveti Jakov beach. You can sunbathe there facing a panorama of the city perimeter and the green island of Lokrum. It’s probably just a 20 min walk from the city gates. It is definitely less crowded than the nearby Banje beach (which is I think, too close to the port for having a tranquil swim) and the promenade to get to this beach also has some amazing views.

In between, if you don’t mind sandless yet private space along the coast with breathtaking views, there is a passage beside Villa Bellavista not too far from Sveti Jakov. The narrow stairway descends to the coast on a climbable cliffside with trees for shade so if you want some peace, this is the spot for you. If the water is calm, which during summer is not unusual, it is definitely tempting to swim.

Until now I am still dreaming of my vacation in Dubrovnik. Actually, I did not spend so much time inside the walls. Not only because it was crowded but also since it was my last stop for my Slovenia-Croatia trip and I preferred to just spend most of the time resting and swimming along the beaches to recover and relax from all the fun but exhausting hiking and walking that I had gone through. And yes, I intentionally put Dubrovnik as my last stop because where else would you relax than in a place where the calm breeze and whispers of the Dalmatian coast caress your face.

One reply on “The King of the Adriatic”

I visited Dubrovnik about 10 years ago and enjoyed it most in the evenings when all the cruise trippers had gone away. Lovely photos.